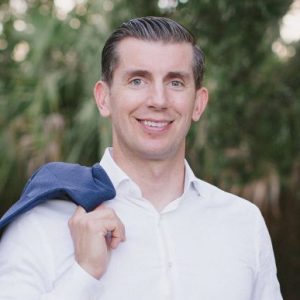 Following internship, Dr. Vickers completed his ophthalmology residency at the Storm Eye Institute at the Medical University of South Carolina where he served as chief resident during his last year. He then completed a two-year fellowship in oculoplastic and reconstructive surgery at the Krieger Eye Institute at Sinai Hospital of Baltimore. Prior to opening his own office, Dr. Vickers worked in two large multispecialty ophthalmology practices in Georgia and Florida.

His area of expertise is cosmetic eyelid surgery, including blepharoplasty, ptosis repair (droopy lid surgery), and brow lift surgery. Additionally, Dr. Vickers has extensive experience in correcting eyelid malpositions such as entropion and ectropion, periocular skin cancer removal and reconstruction, surgical treatment for tearing, and disorders of the eye socket. He also has expertise in non-surgical eyelid and facial rejuvenation with botulinum toxin and dermal fillers.